It is estimated that between a third and half of all acquisitive crime committed in the UK is drug related – costing the country an estimated £14 billion per year. One response to drug related offending is drug courts.

Drug courts seek to use the court process to both support and coerce drug users into successfully engaging with treatment for their addictions, while holding them accountable for their behaviour. The Drug Rehabilitation Requirement, implemented as part of the Criminal Justice Act 2003, grants criminal courts in England and Wales the power to place offenders on compulsory drug treatment, accompanied by court supervision. However, this represents only a partial embrace of the full drug court model.

Since 2003, the evidence base on drug courts has matured. It is now clear that the role of the judge has a particularly strong impact on reducing drug court participants’ offending. Research has demonstrated that the most effective drug courts hold offenders accountable and engage them in a consistent, meaningful and procedurally fair process of sentencer supervision.

Mainstream practice in England and Wales has not responded to this emerging evidence. Many magistrates’ courts do not have specialised court staff or specialised sentencers to oversee drug-related cases. Courts often struggle to have offenders reviewed consistently by the same sentencer, making it difficult to develop an ongoing relationship and to discern progress.

The West London dedicated drug court has built on standard practice for drug-related offending with a number of features that accord with evidence about effective practice.

Evidence suggests that these elements can be more effective at reducing crime and drug use, and improve offenders’ social inclusion and well-being. West London Drug Court demonstrates the feasibility of introducing innovative practice to mainstream courts within current resource and legislative constraints 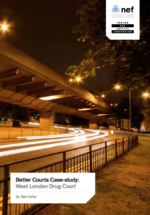