A snapshot of domestic violence courts in 2013

Victims of domestic violence are more likely to be have been repeatedly victimised than victims of any other type of crime. Significant international evidence suggests specialist courts can play a vital role in increasing the victim’s feelings of safety. In recognition of this, successive governments from 2005 to the present day, have established and supported ​‘specialist domestic violence courts’ (SDVCs) in England and Wales.

Our review of current practice in these specialist courts suggests that significant gains have been made since 2005. Both the number of convictions and the percentage of successful prosecutions in domestic violence cases have increased. Additionally, independent evaluation suggests that where victims are engaged and supported by professional victim-focused case workers within SDVCs, they feel safer and their cases are more likely to proceed to prosecution. Lastly, despite the pressures on public services generally, there is continuing support for the principle and practice of the 138 domestic violence courts that currently exist. However, our review suggests that some of the gains made since 2005 are in danger of unravelling.

Between 2010 – 13, the number of convictions for domestic violence fell by 11% despite a continuing rise in the number of incidents of domestic violence reported to the police. While the reasons for this drop in the number of convictions is complex, this means that at a time when more victims are reporting domestic violence to the police, the justice system is securing fewer convictions. Moreover, practitioners have expressed concern that some of core principles of SDVCs are not being delivered consistently in some courts. SCVCs depend on collaborative partnership work between agencies and the voluntary sector. Some practitioners are worried that this is coming under increasing strain as budgets tighten and courts close.

We also found a number of improvements that still be made to SDVCs to bring them into line with the latest international evidence on effective practice. In particular, courts can make a real difference to victim safety and reoffending by using better-tailored protection orders and routine and high quality court monitoring of perpetrators (known as ​“sentencer supervision”). We have identified a clear need to track the outcomes of SDVCs (including victim satisfaction and safety and perpetrators propensity to reoffend) both nationally and locally.

We therefore suggest that: 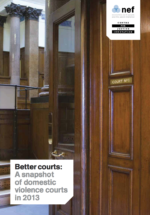