Rising economic inequality was a major cause of the financial crisis

Rising economic inequality was a major cause of the financial crisis. This is the conclusion of an emerging body of research into the links between inequality and the growth in scale and influence of the financial sector. To reduce the risk of future crises, we must both roll back financialisation and implement policies to reduce inequality.

Over the past four decades, the financial sector has been extensively deregulated. It has expanded enormously as a result. Financial markets, products, and firms now play a much larger role in many areas from pensions and social insurance to homes and public infrastructure. Privatisation and the doctrine of maximising value for shareholders have increased the amount of economic activity focused on extracting the largest possible short term profit. These trends are referred to collectively as ​‘financialisation’.

It is becoming clear that financialisation is linked with rising inequality, although the precise causal relationships are complex. Led by a dismantling of the controls over financial flows, the finance sector has been the main component of a decisive shift in the share of gross domestic product (GDP) towards capital and away from labour. Within the shrinking wage share, huge increases in income for top earners, particularly in the finance sector, have left even less for the other 99%. Meanwhile, barely constrained expansion of credit and the consequent relentless rise in asset prices have concentrated wealth in fewer hands. The process is self-reinforcing because increasing wealth accrues both higher income returns and greater political power.

In the UK, the share of profits absorbed by financial corporations has leapt from around 1% in the 1960s to 15% after the financial crisis. Unfortunately this does not spring from the creation of new wealth by a dynamic financial sector so much as from its ability to exploit failed markets to extract excess profits from the rest of the economy. At the same time, after years of persistent decline, the recent small upturn in real wages masks a story of two parallel economies: real earnings for the top 10% rose 3.9% but earnings for the bottom 90% fell by 2.4%.

Inequality is an economic problem

Increasing inequality is more than a moral and political issue – it is a problem for the economy because it increases the risk of financial crises in four different ways:

These four drivers of financial instability have not gone away. In fact, our analysis of seven key trends suggests that the UK economy is particularly vulnerable. For example, the UK housing market bubble has not deflated compared with other economies, and households are once again piling on unsecured personal debt at a rate of £1 billion a month. Analysis of the 2014 Budget focused on the Office for Budget Responsibility’s forecast of sharply rising household debt as the only source of economic recovery. But a resumption of debt-led growth contains the seeds of its own demise, suggesting that rather than an economic renaissance, the UK is experiencing a relapse to its previous failed economic model.

Where to from here?

This complex web of interlinked and structural problems has no quick and easy solution; further research is needed to unpick the causal relationships. However, the direction of travel for economic policy is very clear and has two components.

First, as unleashing the financial sector and abandoning the management of global finance has failed to deliver the promised economic rewards to all but a privileged elite, we need to roll back financialisation. We need smaller and better regulated banks and financial markets, and greatly reduced speculation and cross-border flows of footloose financial capital.

Second, far from being relaxed about widening inequality and dismissing it as a necessary part of dynamic capitalist economies, we should be concerned. The argument that increasing income and wealth inequality holds back growth and helped cause the financial crisis is compelling. We can start to rebalance the distribution of economic rewards by addressing low pay, investing in skills and targeted job creation, and making the tax system more progressive. Above all, we need political commitment to tackling the structural market distortions and imbalances of power that allow excessive inequality to arise in the first place. 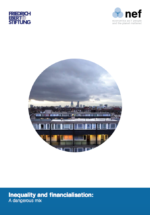