The need for a new economy has never been more urgent

Today Phillip Hammond faced his first major test as the new Chancellor of the Exchequer as he delivered his much awaited Autumn Statement.

Philip Hammond’s first Autumn Statement as Chancellor comes at a critical time for the UK. Millions of people feel they have lost control over their lives and are now being left behind by changes in the economy, technology and climate, even while being promised a parody of control that threatens to make matters worse.

Today’s announcements will provide little comfort, confirming a bleak outlook for the UK economy but largely shying away from bold action to address the challenges ahead.

Around half of this is down to a technical change in the way we account for the Bank of England’s monetary policy operations, so let’s exclude that and look at the remaining increase (broken down in the chart below).

While this has been greeted by some as the ​‘end of austerity’, the Chancellor’s change of pace does not reflect a new approach to public spending, but rather the grim economic repercussions of the Brexit vote. It will bring no respite to struggling households across the UK.

The impact of Brexit 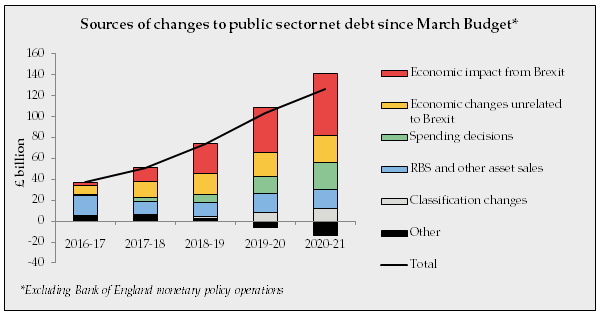 The main reasons for this are as follows:

Some of the increase in borrowing is attributable to the government’s welcome acceptance of the need for public investment – although this is not the primary factor. Confronted by a near-term economic slowdown and a structural deterioration in the public finances following Brexit, the Chancellor has proposed a much looser ​‘fiscal mandate’ that gives him scope for more borrowing over the next five years than was allowed by his predecessor George Osborne. 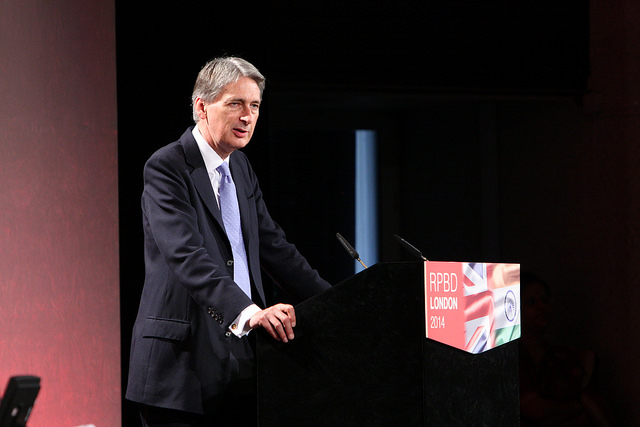 This has given him space to announce £26 billion of new decisions, most of which relate to new capital spending on areas such as transport, housing and digital infrastructure. On the other side of the equation, the net impact of proposed tax changes on the public finances is marginal. Confirmed cuts to corporation tax, a freeze in fuel duty and a small reduction in the taper rate for Universal Credit are offset by some small tax rises, including to the insurance premium tax.

Back in March the OBR forecast that the Government would receive £21.5 billion for selling its shares in the Royal Bank of Scotland (RBS) between 2016 – 17 and 2020 – 21. Since then the share price has collapsed, meaning that if it were to continue with the sale it would only receive £15.9 billion at current prices, representing an eye-watering £30 billion loss on the total taxpayer investment.

As a result, the Chancellor has stated that further sales are ​“not practical at the moment”, and the OBR predicts that no RBS shares will be sold over the next five years. This leaves a huge black hole in the public finances, increasing public sector net debt by £12 billion relative to the forecast in March.

Given that the bank can’t be sold in the near future, it’s time for the government to put all options for the bank’s future back on the table and urgently examine whether there are alternatives that could deliver better value for taxpayers and the economy.

NEF has proposed turning RBS into a network of 130 local people’s banks with a mandate to serve their local area, lend to small businesses and provide universal access to banking services. This would invest in and regenerate the disenfranchised communities that voted Leave, as well as mitigating the economic consequences of the vote that are likely to hit us: local public banking networks in Germany and Switzerland kept their economies going through the last recession while UK banks were cutting back their lending.

The OBR’s projections confirm the scale of the economic challenges we face, and the urgent need for a new economy. But instead, the Chancellor has delivered a Budget which tinkers around the margins.

From reframing the debate on immigration to demanding we take control of RBS, if we want bold change, it’s now up to us to make it happen. 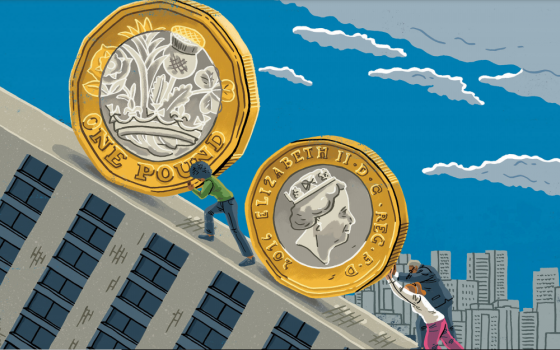 This is your brain on neoliberalism

If you can’t afford to buy a new car or pay your rent, it’s your own fault – that’s what neoliberalism tells us. No wonder we’re in the midst of a mental health crisis.

A coal mine, trust, and just transition in Cumbria

After its legacy of deindustrialisation, attempts to stop a new coal mine in West Cumbria have to bring along disenfranchised workers and communities.

Scheme likely to protect just 17% of jobs at risk from redundancy.