A People’s Budget for the 21st century 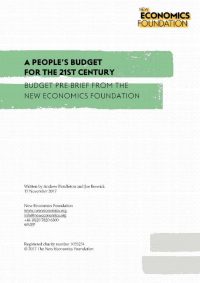 NEF’s pre-Budget briefing argues that the Chancellor should create a People’s Land Bank as the central plank of a People’s Budget for the 21st century. Britain is facing an ​“economic malaise” driven by falling living standards, growing indebtedness and increasing wealth inequality. With Brexit only set to make this crisis worse, this is the last chance to take the big and bold action so desperately needed.

In the early 20th century, David Lloyd George proposed a ​‘People’s Budget’ to deal with a fundamentally unequal society. We need a People’s Budget for the 21st century, designed not just for but with people as well. As the housing crisis sits at the heart of our economic malaise, the single biggest thing the Chancellor could do in such a Budget would be to set up a People’s Land Bank.

Instead of selling off public land (where only one in five homes built are ​‘affordable’), public bodies would transfer this land to kickstart a People’s Land Bank. By the Government’s own calculations, that could produce 320,000 genuinely affordable homes.

The People’s Land Bank should be supported by a series of other policy reforms designed to address the housing crisis, including:

1. The compulsory purchase system should be reformed to enable councils to purchase brownfield or agricultural land at a price closer to its value at current use, as opposed to allowing land traders to charge a price based on what it could be worth with planning permission. With this reform, the People’s Land Bank could acquire additional land at affordable prices in places with acute housing need, and work directly with public and community sector partners to meet that need.

2. The borrowing cap, which limits how much councils can borrow to build affordable housing, will need to be lifted, and councils must be allowed to retain 100% of the receipts from houses sold under the Right to Buy to build new genuinely affordable homes in partnership with communities, as opposed to sending the majority of it back to the Treasury.

3. The Chancellor should be taking advantage of lower interest rates to borrow for housing investment. This investment should be used to create a £10bn community housing fund that could be used by community groups, local authorities and housing associations to support community-led affordable housing schemes. In the long run, social housing usually pays for itself – it’s a long-term asset, and reduces the housing benefit bill – but in the short term, investment will be needed.