Who watches the workers? 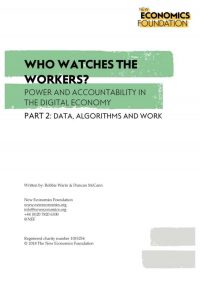 This is the second of four papers exploring power and accountability in the data economy. These will set the stage for future interventions to ensure power becomes more evenly distributed. This paper explores data and algorithms in the labour market, while future papers will examine: the companies built on data that mediate our interface with the digital world; and the data economy.

Our research so far has identified a range of overarching themes around how power and accountability is changing as a result of the rise of the digital economy. These can be summarised into four key points:

The labour market has always been a delicate balance between workers and employers. History is in some sense the story of employers trying to get the most out of their employees while workers organise and fight for power and more control over their lives. The introduction of data-gathering technology, its analysis and use has disrupted that balance and shifted power firmly back to employers. This is especially true within the new on-demand labour platforms like Deliveroo or Amazon Mechanical Turk but is also filtering into all areas of work. We have identified a number of major issues related to data and labour: