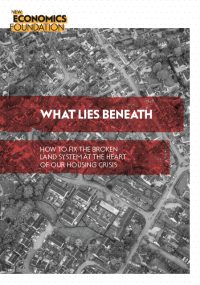 What is less obvious, but no less broken, is the market which sits beneath the housing market, and drives many of the worst aspects of it. When we talk about high rents, or high house prices, in many ways what we are really talking about is the unaffordability of land.

This briefing reveals new research that shows how excessive land prices, driven by speculation, are making a significant contribution to the housing crisis, and putting up significant barriers to any attempts to solve it.

It shows how the housing crisis is most severe in places with high land prices: rents eat up a massive chunk of people’s income, and the numbers of homeless people housed in temporary accommodation dwarfs other areas, hitting the poorest most severely. It also shows how these same high land prices systematically stymie attempts to redress the housing crisis, so that the building of affordable homes has plummeted in exactly those places which need them most: those with the highest cost of land.

A supply of affordable land is crucial to affordable housebuilding, but landowners get to set the price of land at levels which make increasing the supply of affordable homes extremely challenging. Up and down the country communities are paying the price for the enormous amount of power that these landowners have. It is landowners – whose price-setting power earns them billions of pounds in windfall gains – who determine what gets built for communities in their area, and not the other way round. This briefing contains the tools needed to reverse this.

The report contains five key recommendations, the most essential of which is an end to the present public land sale, in which public land – often in places with high land values – is being sold to the highest bidder. Our research shows the programme is only delivering 20% affordable homes, and 6% social rent on former public land. Instead of being sold off, public land should be put to the service of long-term public good. It should form the basis for a People’s Land Bank, to be used strategically in partnership with communities to meet their needs for affordable housing, and supplemented by private sector land bought at a fairer price (existing use value), which enables the benefits of land value to be shared.

The other recommendations are as follows:

Read the full report below.