Still no homes for nurses

How NHS land is being sold off to build unaffordable homes 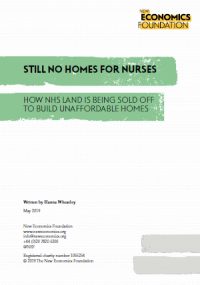 We are in the grips of a housing crisis. By selling off public land to the highest bidder, the Government is making it worse. If surplus public land were instead put to public and community use, we could build the homes we need – instead, just one in five homes being built on public land is affordable.

In January last year, we published No Homes for Nurses, which examined the NHS public land sale. We looked at sites sold between 2015 – 2017 under the Government’s public land sale programme. Our analysis found four out of five homes built on these sites — including hospitals, community health centres, and other health service infrastructure — would be unaffordable to a nurse on an average salary. Only one in 10 of the homes built on sold-off NHS land would be for genuinely affordable social rent.

This year, we have taken a fresh look at 23 sites the NHS declared ​‘surplus’ in England in 2017 – 18, and can reveal once again that the sale of NHS land is fundamentally failing to produce the affordable homes we need, and is in fact exacerbating the deep affordability crisis across the UK. In many ways things have got worse. There are 1.2 million English households on the waiting list for social housing, but the majority of homes built on NHS land will be out of reach to those who most need them.

By failing to use the land to meet the vast and growing unmet need for decent, affordable homes, the Government is dramatically failing in its mission to ​“fix our broken housing market”. Public land could be key to solving the housing crisis, but instead is being used for more unaffordable homes, and generating record profits and bonuses for the big developers.

The NHS is selling off land as part of the Government’s Public Land for Housing Programme, which is overseen by the Ministry of Housing Communities and Local Government (MHCLG). This programme has the dual aim of releasing enough land for 160,000 homes by 2023, and raising £5 billion in capital receipts. But the government is currently expected to fall almost 100,000 homes short of this target by 2020. On top of that, there is scant regard for the types of homes. So not only is the government failing to build homes, it’s failing to build the homes we need. Despite requests from a Committee of Public Accounts recommendation, MHCLG do not collect or publish data on the number of affordable homes built, and the number of homes made available to key workers. Further, MHCLG has not published an annual report on the land for new homes programme since February 2017. When NEF requested this information using a Freedom of Information Request, the information was denied. Our research begins to fill this information gap, and demonstrates that the Government is missing the mark on public land.

Campaigns Save public land Homes For Us