Quality childcare for all 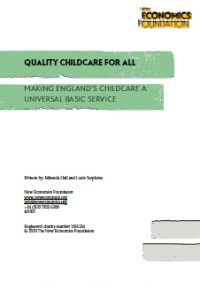 The childcare system in England is broken. Our nurseries are among the most expensive in the world, while childcare professionals are some of the lowest paid workers in society. Over the past 20 years, policymakers have come up with various interventions in childcare policy. In September 2017, Theresa May’s government introduced 30 hours of free childcare for some three- and four-year-olds. But the policy is badly thought out as well as severely underfunded. Nurseries across the country make use of loopholes to charge parents for ​‘additional extras’ like nappies and food, to increase fees for non-government funded hours, and to reduce opening hours. Even more worryingly, 17% of childcare providers in England’s poorest areas are facing closure. The latest data from Ofsted indicates that over 500 nurseries, pre-schools and childminders have closed each month between April 2018 and March 2019.

Childcare as a Universal Basic Service has the potential to transform the lives of children and parents. Extra money alone will not tackle the underlying structural problems of our broken childcare system. Before investing more money, we need to ask where that money is going. 84% of early years provision is now run by private providers, as a consequence of government policies with the express intention of accelerating the marketisation of childcare. From inequalities of access to the risk of collapse from debt-fuelled expansion, the evidence shows that we cannot trust the care of our children to unaccountable, profit-driven companies.

Change need not entail a top-down restructuring led by central government. We argue for an approach that meets this shared need by exercising collective responsibility. This requires policy interventions that ensure true universality by approaching childcare as a Universal Basic Service (UBS) for all children from the end of paid maternity leave.

The current approach to childcare means that the state is significantly subsidising the private sector. The likely trajectory of policy is that this subsidy will increase. This creates an opportunity for profit making that is at odds with the social purpose of childcare. It is time for childcare to be recognised as a Universal Basic Service. At the very least the state should be driving a much harder regulatory bargain with providers to ensure that all those receiving subsidies deliver a clear social mission. The aim of future childcare policy should be to reshape the sector so that the extraction of private profits (and therefore of public subsidy) is, over time, removed altogether and replaced with a partnership approach in which the state, care workers and parents interests are aligned in new types of ownership structures to deliver a clear social mission. Without wholesale reform of the system, more free childcare risks continuing to exploit workers and shut out lower income families.