Building a Minimum Income Guarantee for the UK 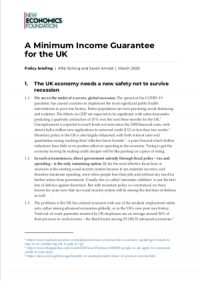 We are in the midst of a severe, global recession. The spread of the COVID-19 pandemic has caused countries to implement the most significant public health interventions in post-war history. Entire populations are now practicing social distancing and isolation. The effects on GDP are expected to be significant, with some forecasters predicting a quarterly contraction of 15% over the next three months for the UK. Unemployment is expected to reach levels not seen since the 2008 financial crisis, with almost half a million new applications to universal credit in less than two weeks.

Monetary policy in the UK is also largely exhausted, with both interest rates and quantitative easing reaching their ​‘effective lower bounds’ – a point beyond which further reductions have little or no positive effect on spending in the economy. Trying to get the economy moving by making credit cheaper will be like pushing on a piece of string.

More than at any time since its creation, the country is coming to rely on its social security system. But we have entered this current crisis with one of the weakest employment safety nets, either among advanced economies globally, or in the UK’s own post-war history. Total out-of-work payments received by UK employees are on average around 34% of their previous in-work income – the third lowest among 35 OECD advanced economies. And at 15% of average earnings, the main adult unemployment payment is worth less than at any time since the 1948 creation of the welfare state.

In response to the present crisis, NEF is therefore proposing a substantial and immediate reform of the current social security system, building on and adapting from our previous recommendations from 2019. Given where we are today, the immediate priority for government should be to put in place a comprehensive, sufficient, non-conditional, non-means tested at the point of access, minimum income floor to catch everyone who is currently missed out by the job retention scheme and the self-employed income support scheme.

In this brief note, we set out the first details of a new proposal to build a Minimum Income Guarantee (MIG), to sit alongside the government’s current job retention and self-employed income support schemes.