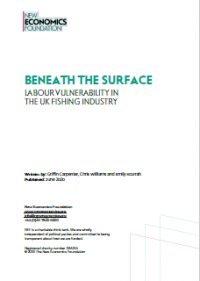 The Covid-19 public health crisis has exposed many weaknesses and vulnerabilities in how our economy is structured. Some of these vulnerabilities have for a long time been known but routinely ignored. Others have been exposed to wide public attention for the first time.

The fishing industry is an inherently vulnerable industry. Fishers chase a moving resource, are subjected to temperamental weather, and are bound by numerous policies to manage a public asset. With Covid-19 disrupting international supply chains and causing restaurant sales to plummet to zero, these underlying vulnerabilities have compounded. Alternative markets, such as direct sale to consumers, continue to be developed but are starting from an extremely low portion of sales.

Beneath the surface there is another set of vulnerabilities less recognised, but just as important, that relate to the unique structure of labour in the fishing industry. Most fishers have no set salary. They have no statutory entitlement to paid leave or sick pay. They have no workplace private pension. They have no minimum wage. Few fishers are members of unions. Migrant labour is increasingly being used at sea, but without work visas to rely on. Fishers are going to sea without a financial safety net. This labour insecurity leads to psychological hardship matched only by the physical hardship of working at sea. By per capita fatalities, fishing is the most dangerous job in the country.

Within the UK fishing industry many of these vulnerabilities are a well-known but unpopular topic of conversation. There is an overwhelming sense that this labour model is just ​‘the way it’s always been done’. This is true, until it’s not. Core aspects of labour policy – from child labour laws to working hours, from minimum wages to women empowerment – are accepted across society but had to disrupt existing practices before they were seen as a societal norm. And it is not only our policies that change but also the world in which they are made. Neither shellfish exports to East Asia nor the web apps for direct sale fit the image of an unchanging industry. Even in a very strict sense the argument is not correct. In the 1970s, the deep sea fishing fleet in the UK operated with formalised labour and was organised into unions.

The UK fishing industry should not be resigned to accept the current structure of fisheries labour as an inevitable matter of fact. Like all social systems, the systems that surround fisheries labour are constructed and can be reconstructed. As Covid-19 exposes underlying vulnerabilities in fisheries labour, now is the chance to reflect, to learn, and to change these systems. There is also a strong appetite for change as post-Brexit fisheries policy is being developed and a new future for the UK fishing industry is being discussed. Fishing labour must be part of this future.

This briefing provides an overview of how fisheries labour is paid and organised and how this is situated in a broader economic context. Ideas are provided for new policies and structures onboard fishing vessels, in the self-organisation of the fishing industry, in fisheries management regulations, and over broader economy-wide policies.