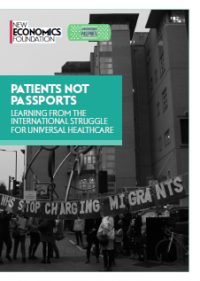 This report focuses on the set of policies introduced as part of the government’s Hostile Environment immigration policies – which restrict access to public services and criminalise everyday activities – to expand border enforcement into the National Health Service (NHS) and restrict access to healthcare.

Throughout the report, we highlight campaigns and movements that have successfully challenged barriers to accessing healthcare. We hope that these experiences of broad-based opposition to charging migrants for healthcare, and their achievements in improving the accessibility of health systems, will be instructive to healthcare professionals, healthcare bodies, unions, and campaigners here in the UK, and help inform collective organising against the policy in the months and years ahead.

Despite differences in policy and context across the countries reviewed in this report, there is a remarkable uniformity in terms of how restrictive policies are introduced and the arguments used to support them. However, these arguments often lack evidence or directly contradict existing evidence bases. When restrictions have been implemented, it is clear that they harm migrant health and increase costs for health systems. Invariably, restrictive policies are met with multifaceted resistance from local and regional governments, healthcare professionals, non-governmental organisations (NGOs), migrant communities, and wider populations demanding change.

The hostile environment in the NHS

The Immigration Act of 2014, and further regulations in 2015 and 2017, expanded the range of NHS services that are subject to charges. Those without leave to remain in the UK now must pay an additional visa fee to access the NHS (the ​“Immigration Health Surcharge”), and NHS Trusts are required to check the eligibility of patients for care. Those unable to prove their eligibility are charged up to 150% of the cost price for secondary and community care services. Behind this, NHS Trusts share patient data and report patient debt to the Home Office, information which is then used by immigration teams to track, detain, and deport people.

The government has attempted to justify these policies by referring to the alleged strain placed on the NHS by migrants and the need to recuperate the cost of providing care to ​‘overseas visitors’. They have frequently invoked the narrative of ​‘health tourism’ that is widespread in the media. However, these arguments are misaligned with the principles of the NHS and the economic realities of migration and healthcare.

Evidence collected about the impact of implementing the charging regulations so far shows that migrants – including those entitled to care under current policy – are deterred from seeking care, face great delays in accessing treatment, or have care denied outright. This is compounded by data-sharing agreements between NHS bodies and the Home Office. By presenting barriers to upstream, preventative care, charging regulations and data sharing risks worsening health and displacing healthcare demand towards more costly acute, emergency care.

Resistance to the Hostile Environment in the NHS is gaining ground through networks of locally organised groups of healthcare workers joining forces with migrant community groups and NHS campaigning organisations. Grassroots opposition has been accompanied by opposition from civil society and healthcare organisations, from the British Medical Association (BMA) to the Academy of Medical Royal Colleges and the Royal College of Midwives.

It is important to acknowledge that charging is not a recent development. A similar charging policy, with a similar rationale, was introduced in the 1980s and was met with widespread resistance from trade unions, migrant organisations, law centres, and health professionals. The No Pass Laws to Health campaign formed as a key umbrella organisation for this resistance. This resistance is the antecedent to today’s organising initiatives under the banner of the Patients not Passports campaign.

Based on a review of existing international comparisons and deep dives into four case study countries – Italy, Sweden, Germany, and Spain – we can see that migrants are frequently excluded from healthcare systems. This is despite international commitments from host countries to the goal of Universal Healthcare Coverage and, in many cases, claims from those countries to have reached this goal in practice.

Across each case study country, migrants face a range of barriers to accessing care. Broadly, these are the result of (1) restrictive national policy; (2) the integration of healthcare and immigration enforcement; and (3) the administration of healthcare in practice, such as requirements to show identification or proof of address, which can be hard for some to produce.

Across all the countries studied, there is evidence that restrictive national policy harms migrants. In Spain, where this impact was quantified, researchers found a 15% increase in mortality amongst the migrant population – corresponding to 70 additional deaths per year – as a direct result of restrictive reforms over a three-year period. This is despite many regional government attempts to soften negative impacts by bypassing national law to varying degrees.

Across Europe, governments have attempted to justify restrictive healthcare policies on similar terms to Westminster. The principle of so-called health tourism is invoked, as is the need to keep costs down. There is strong evidence from across case study countries, however, that restricting healthcare for migrants’ costs, rather than saves, money. Researchers in Germany, for instance, found that restricting the healthcare entitlements of asylum seekers cost the health system over a billion euro compared with offering unrestricted access.

While policy and practice in the countries studied have waxed and waned significantly in recent years, and while there is still some way to go, the general trend across countries is towards more inclusive health coverage, with migrants better able to access healthcare and enjoy their rights. This change has not occurred as a result of national governments voluntarily responding to the evidence but is rather the result of multifaceted opposition and pressure from city and regional governments, healthcare workers, civil society, NGOs, international organisations, and wider publics.

Given the domestic evidence about the negative impact of NHS charging, and the international evidence about healthcare restrictions highlighted in this report, it is damning that the UK government continues to pursue these policies. Unless the government repeals the National Health Service (Charges to Overseas Visitors) (Amendment) Regulations 2015 and 2017, alongside the Immigration Act (2014), these healthcare restrictions are likely to continue to cause further damage to both health and the healthcare system.

Across the countries studied, successful opposition to charging policies have used several strategies and tactics simultaneously. These frequently include the following:

There is scope for opposition in the UK to apply some of the strategies and tactics used internationally to resist the Hostile Environment in the NHS in various ways, including both local-level resistance by NHS Trusts and conscientious objection by healthcare workers. This is the arena in which engagement and intervention by unions holds considerable promise. Healthcare workers’ opposition to the policy could be strengthened by advice from their unions and representative bodies as to their rights and obligations considering the charging duties.

Opposition in most of the countries examined have set their long-term strategic sights on national policy change and have done so across the countries reviewed using several common tactics, often simultaneously. Most commonly, tactics have included (1) holding large public demonstrations against restrictions and the mobilisation of a broad base of actors to exert pressure; (2) demanding universal access, rather than exemptions; and (3) broadening the argument beyond economics. Across the cases studied, policy change has been the result of this pressure placed on government, rather than a result of voluntary government action due to the evidence that restrictive policies are do not work, endanger lives, and cost money.

The examples in Europe, and previous movements in British history, suggest the following key principles and ideas for taking the movement forward in the UK: