The road to recovery

The pandemic didn’t create inequality in the UK – it only made it worse. But what happens next isn't inevitable.

This is an article from the third issue of the New Economics Zine. You can read the full issue here

The past year has been extremely difficult for all of us. Over 4 million people in Britain have tested positive for Covid, and over 150,000 people have died with the virus on their death certificate. 2.7 million people were relying on jobseeker’s allowance or universal credit in March 2021, compared to 1.4 million in March 2020. 11 million people have been furloughed at some point over the past year, meaning that many were earning less than usual. The pandemic has prevented us from seeing friends and family, and forced many into social isolation. It has produced the worst recession since the second world war, and has exposed longstanding weaknesses in British society, like our deep inequalities, low pay, insecure work, and weak safety net for people struggling to make ends meet. But it has also increased public appetite for change and shown us how interconnected we all are.

The pandemic is exacerbating problems which existed long before 2020. Black, Asian and minority ethnic workers, for example, have been three times more likely to be made unemployed during the crisis than white workers. Meanwhile, foodbank use went up in 90% of English urban councils in 2020, and people on low incomes have been most likely to be furloughed and have their pay cut.

Many economic forecasts are currently very optimistic. The Office for Budget Responsibility (OBR) expects the UK economy to have recovered to its pre-pandemic size by the second half of 2022, which would be the most rapid recovery from a recession in 50 years. But these predictions may turn out to be overly optimistic.

This is because, firstly, when the furlough scheme and the temporary £20 universal credit uplift are withdrawn in the autumn, the economy will face a cliff-edge. Many people on furloughed jobs will find themselves unemployed, with an even more meagre social security system to fall back on. Even with the government’s tax break for investment, many businesses will struggle to survive, let alone invest, given the amount of debt taken on during the crisis. And while many households saved money during the pandemic, these were typically higher-income households, who are more likely to keep this money as savings, rather than spend it all in the recovery. In contrast, lower-income households are more likely to have seen their savings shrink in the pandemic rather than grow.

Secondly, if this government doesn’t shake its fixation with reducing the public deficit, it might not put enough stimulus money into the economy, which would end up stifling our recovery. Even fiscally conservative organisations like the Organisation for Economic Co-operation and Development (OECD) and the International Monetary Fund (IMF) think we shouldn’t worry about government borrowing until the recovery is well underway. While government borrowing costs have risen over recent months, they are still very low, and most of the money the government borrowed during Covid has been locked-in at extremely low rates. While there are constraints on the amount a government can responsibly and sustainably borrow, these are determined by complex macroeconomic dynamics. They can’t be trivially reduced to a single number, like the debt-to-GDP ratio that the chancellor is obsessed with. A one-off increase in government borrowing at very low rates to steer the economy through a once-in-a-lifetime crisis is not a cause for panic. Economic scarring, where people’s livelihoods are damaged long after the recession ends, is a far greater threat to the UK’s economic future.

But none of this is inevitable. The government has a choice to build a stronger, fairer and more resilient economy – and it should start by properly supporting people living on the lowest incomes. Before the pandemic, our social security system provided the third-lowest rate of support amongst wealthy countries. If someone working on the national average wage in Luxembourg, for example, lost their job, they would have got 86% of their former wage for a year through the benefits system. In Britain, it was only 34%. Our government has temporarily boosted universal credit by £20 a week, but it’s not enough: even with the boost, around one in five people and one in three children in the UK are still living in poverty. At the New Economics Foundation (NEF), we’ve found that around a third of people are living in families with too little income to meet every day needs.

A strong social safety net doesn’t just mean that we can live with dignity when we are struggling – it benefits everyone, regardless of economic security. Supporting people’s incomes during an economic downturn, when they are out-of-work and reliant on social security, acts as something called an ​‘automatic stabiliser’. When people on the lowest incomes receive extra money, they will generally spend every additional penny, unlike higher earners, who are more likely to save it or invest it in things like overseas assets. This means that a proper safety net provides an economic stimulus because it enables households to keep spending money on goods and services even during a recession, with good knock-on effects for the rest of the economy.

One way of making sure this happens during the pandemic would be to introduce a minimum income guarantee: a payment of at least £227 a week to everyone who needs it so they can afford the basics, like food and housing. But an income guarantee should not just be a pandemic response. It should, at some level, become a permanent feature of the UK’s social security system, so we don’t go back to having one of the weakest safety nets out of all wealthy nations. After the pandemic, this income guarantee could be fully funded through making our taxes more progressive. This could mean making income tax fairer, or taxing income from wealth at the same rate as income from work – income from wealth is currently taxed approximately half as much as wages.

While a strong social security system supports people directly, helping businesses also supports people by providing jobs. The government has introduced a range of measures for struggling companies during the crisis, including the furlough scheme, grants, lots of low-interest and publicly-guaranteed loans, and tax deferrals. These mean that many UK businesses are well placed to grow when the economy begins to recover. However, like households, the impact of Covid on companies has been highly unequal. While some companies – even many small businesses – have been able to increase their cash reserves during the crisis, others – particularly in sectors highly affected by Covid like hospitality – are still struggling. One in nine businesses currently have little or no confidence that they’ll make it through the next three months, and as many as a third of firms with Covid loans may struggle to make repayments. Across all sectors, smaller firms have been more likely to struggle, as they have more limited ways to raise funds than their larger counterparts.

High levels of business debt, particularly debt used to pay for cash-flow problems rather than for investment, can hinder future business investment and companies’ abilities to grow. This is because these businesses’ profits have to be put towards paying off interest payments rather than investing in improvements. This in turn could hold back the UK’s economic recovery, through supressing business’ spending and income. High levels of debt could also make companies more likely to go bust if they encounter any short-term drop in revenue in the future.

The government should give debt relief to businesses in sectors that have been heavily impacted by Covid, including things like partial debt write-offs for companies with Covid emergency loan debts or who are in rent arrears. This support could prioritise small and medium businesses.

But it’s not enough to keep businesses going – as we emerge from the crisis, the government must also invest to help drive the recovery and create new jobs. Right now, there are three unemployed people for every job vacancy. Investing in new jobs will not only support people’s livelihoods but also get the economy ready to tackle longstanding challenges like the climate crisis and an aging population.

The UK has set a target to cut its carbon emissions to net zero by 2050, which will cost a yearly £33bn of public money more than what we’re currently spending, according to the Institute for Public Policy Research (IPPR). This £33bn would not only help the government meet its climate targets – it would also put many people back into work. At NEF we estimate that investing £28bn over 18 months in green infrastructure – that’s stuff like energy efficiency, reforestation and transport – would create the equivalent of 400,000 full-time jobs.

“Let’s not squander the opportunity to build a fairer, more resilient economy: where we can all meet our everyday needs, with properly funded public services, and a healthy environment”

The government is going to have to spend to get us out of this recession. But the government should make stimulus decisions not just with an eye on the incomes of families and firms, but with a longer list of quality-of-life indicators – like they do in New Zealand. This could help direct public money towards crucial public services that have been underfunded for the last decade. Spending per head on adult social care in England, for example, was 8% lower in 2020 than in 2010. At NEF we estimate that spending £15 – 20bn over 18 months on social infrastructure – such as care workers, nursing assistants and teaching assistants – would create 700,000 full-time equivalent jobs, improve lives, and help rebuild public services. It would also take some of the strain off underfunded councils when it comes to paying for social care. Finally, the jobs have the added benefit of being low carbon, so between investment in green infrastructure, and investment in public services, we could create over a million low-carbon jobs.

Despite the challenge, over the last year the government has engaged in unprecedented intervention in the economy. As the vaccine is rolled out, lockdown is relaxed, and our thoughts turn to the future, we have a once-in‑a lifetime opportunity to build a fairer, more sustainable economy. But the government must have the right goals, and show far greater ambition and vision for a better future than it has done so far. The government still has much work to do to protect families, companies and jobs. Economic crises are devastating, but they also provide a political opportunity for real change. Let’s not squander the opportunity to build a fairer, more resilient economy: where we can all meet our everyday needs, with properly funded public services, and a healthy environment.

Up in the air

Our consumer choices, from buying less tobacco to more diesel, are shaped by government policy. What if we applied it to air travel? 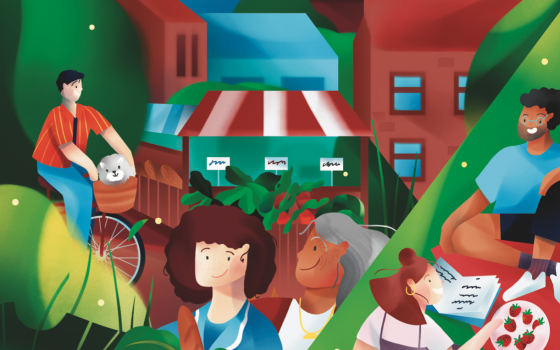 What world do we want to return to?

How a new economy can help build something better

Issue 3: What world do we want to return to?