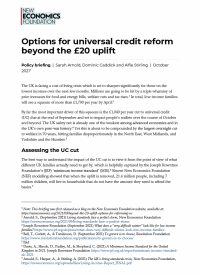 The UK is facing a cost of living crisis which is set to sharpen significantly for those on the lowest incomes over the next few months. Millions are going to be hit by a triple whammy of price increases for food and energy bills, welfare cuts and tax rises. In total, low-income families will see a squeeze of more than £1,700 per year by April.

By far the most important driver of this squeeze is the £1,040 per year cut to universal credit (UC) due at the end of September and set to impact people’s wallets over the course of October and beyond. The UK safety net is already one of the weakest among advanced economies and in the UK’s own post-war history. Yet this is about to be compounded by the largest overnight cut to welfare in 70 years, hitting families disproportionately in the North East, West Midlands, and Yorkshire and the Humber.

The best way to understand the impact of the UC cut is to view it from the point of view of what different UK families actually need to get by, which is helpfully captured by the Joseph Rowntree Foundation’s (JRF) ​‘minimum income standard’ (MIS). Recent New Economics Foundation (NEF) modelling showed that when the uplift is removed, 21.4 million people, including 7 million children, will live in households that do not have the amount they need to afford the basics.

Not only this, but those that fall below the MIS fall significantly below. Even before the effects of energy price increases, the UC cut will leave the average single adult that is below the MIS with only 54% of the income they need to stay afloat, while the average couple with two children will have just 63% of the income they need (differences occur both because different household types have different median levels of income, but also different levels of need). This means choosing between essentials like food, clothes or a warm home, every single week.

Using the MIS as a framework allows us to examine the road to a far stronger safety net in the UK in a systematic way. New modelling by NEF has taken a series of example packages of reforms to UC to understand their effects for different families. All modelling has been forecast for 2026/​27, when UC is expected to be fully rolled out, to best gauge the long-run effect of different reforms. And each package has been costed at approximately the same level as the £20 uplift in that year (£7.5bn in 2026/​27), to compare broadly similar levels of investment in the system.

Alongside a scenario where the £20 uplift remains in place, we modelled the following nonexhaustive list of example reforms: