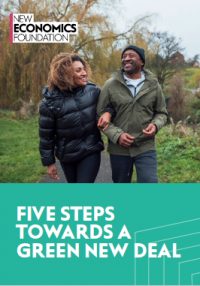 Last November, governments from 197 countries met in Glasgow for Cop26, the UN climate talks, with the hope of presenting plans to limit global heating to no more than 1.5C. But the conference was a disappointment that failed to live up to its own rhetoric. It came hot on the heels of a UK autumn budget which barely mentioned the climate crisis, and a net-zero strategy which fell far short of what we need. This follows the International Panel on Climate Change (IPCC) issuing its starkest warning yet over the summer, in the wake of wildfires, floods and hurricanes across the globe: the climate crisis is already happening as a result of how we live and power our economies.

The past year and a half of the pandemic has been extremely difficult for all of us, and has widened inequalities in the UK. But it’s also made us realise what’s important: our health, our loved ones and the communities around us. And yet for the last decade, the benefits of growth have not been fairly distributed, living standards haven’t budged, and swathes of our country have been left behind. When facing down the climate crisis, we need an answer to the question that dominates our politics: how do we get the economy to work for everyone?

More about this video

That is the question that sits at the heart of the government’s favourite phrase: ​‘levelling up’. And it’s the right question. This government has made ​‘levelling-up’ communities around the country one of their flagship missions. But despite a lot of lip service, it has not produced a strategy to get it done. The goal of levelling up should be simple: to lift people’s living standards, particularly in communities that have faced decades of deprivation and neglect. The economic aftershocks of the pandemic will make this harder, but business as usual just won’t cut it.

The government will not be able to level up struggling parts of the country without facing up to our biggest challenge: the climate crisis. Our government has set a legally binding target to slash our greenhouse gas emissions to net zero by 2050. The UK’s commitments to cutting our emissions fast mean that the economy will have to change a great deal in the next decade. This has to be done in a way which reduces inequality and improves people’s lives. Some of the communities in need of levelling up are those hit hardest by the deindustrialisation of the 1980s.

“The government will not be able to level up struggling parts of the country without facing up to our biggest challenge: the climate crisis.”

This government isn’t connecting the dots: we can’t level-up and build back better from the pandemic without a plan tackle the climate crisis. And if we take the right action, we can create a society which meets everyone’s needs while averting climate breakdown. Fail to act, and we repeat the economic shocks of the past, with increased inequality and climate disaster across the globe.

This is a big challenge and we urgently need a practical, bold solution. But the good news is, we have a plan: the Green New Deal. And in this pamphlet we outline the first steps we need to take. The Green New Deal is an economy-wide plan that puts the climate crisis and people’s living standards at the top of the government’s agenda. It would not only curb the worst effects of climate breakdown but it would reprogramme our economy so that it works for everyone.

Investment is key: the government cannot level up on the cheap. There is no path to a net-zero economy without public investment – so why not create jobs and boost industries in struggling communities? This should be combined with local industrial strategies that identify potential new, secure, well-paid, low-carbon jobs in the industries of the future. Private money also needs to flow towards things which cut carbon and make our lives better, rather than paying for dirty, polluting sectors of our economy. Then there’s power. If the government wants to level up the country, it needs to give regional and local government more powers to tailor responses to their local needs. And people – ensuring people are able to live and thrive in a low-carbon economy. And finally there’s the world – the UK must play a leadership role in driving forward a Green New Deal on a global scale, including taking responsibility for our historical and current emissions and resource extraction.

It’s time for the government to realise that it cannot level up the UK without a Green New Deal.

Poorly targeted policy is failing to prevent an income crisis