Social security for all 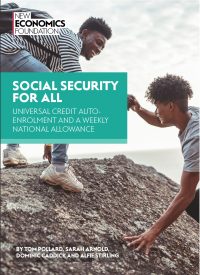 The Covid-19 pandemic resulted in millions more people needing to turn to the social security system for support. During 2020, the number of people on universal credit more than doubled, and remained at these unprecedented levels throughout 2021. Although the Department for Work and Pensions (DWP) was rightly praised for managing this massive surge in demand, many people still struggled to access sufficient support during this period. The experience has highlighted some key problems with our social security system and brought these to the attention of a much wider cross-section of the public.

Much of the recent debate has rightly focused on the adequacy of benefits, and in particular, the £20 universal credit uplift put in place during the pandemic. This uplift ended at the beginning of October 2021, a decision which was predicted to have a devastating impact: the Joseph Rowntree Foundation (JRF) found that 21% of all working-age families in Great Britain will experience a £1,040 a year cut to their incomes, while Citizens Advice reported that it could push 2.3 million people into debt. Cuts to the universal credit taper rate and tweaks to work allowances at the October Budget still leave around three-quarters of claimants (73%) worse off than they would have been had the uplift stayed in place.

NEF has been clear that, even with the £20 uplift, universal credit is inadequate and that we should be working towards a level of support that guarantees everyone a living income to reflect their circumstances, in line with JRF’s Minimum Income Standard, to ensure that people can live in dignity, whether in or out of work. Our previous modelling shows that around 32% of the UK population – 21.4 million people – were living below this minimum socially acceptable standard of income by the end of 2021.

However, benefit rates are only part of the equation – questions around eligibility, accessibility, and take-up are also critical in determining whether people get the support they need. Moving towards a guaranteed living income for all will require significant changes to the way our social security system operates.

There has been growing interest in approaches that could deliver this scale of change. A Universal Basic Income (UBI) would provide a regular unconditional payment to everyone, while a Minimum Income Guarantee (MIG) would top up everyone’s income to a minimum level. Both approaches have their pros and cons. A UBI is elegantly simple but would be an expensive way to ensure a living income; an MIG would target resources at those who need them most but would be complicated to administer.

This report sets out two proposals that, through repurposing elements of the current tax and benefits architecture, would introduce key elements of both a UBI and an MIG, striking a balance between the universalism of the former and the efficiency of the latter:

These proposals would ensure more people have support when they need it. The Weekly National Allowance would provide everyone with the security of a consistent level of income they can rely on, as well as a collective stake in our social security system. It would also reduce inequality: the net distributional effect would be to take around £8bn currently spent on tax allowances for the 35% highest-income families and reallocate this to the remaining 65% of families. A more automated system of universal credit enrolment and payment would mean that we could all expect additional support to be provided when we are struggling, just as we expect our income to be taxed when we are earning.

Both proposals would also help to break down the divisions created by a toxic narrative that sets ​‘taxpayers’ against ​‘benefit claimants’ and, in doing so, reduce the stigma associated with receiving support. Together, the proposals would see net spending on cash transfers to families on low incomes increase by around £13.3bn, equivalent to around 83% of the cuts to welfare made between 2010 and 2019. This would increase disposable incomes for the poorest 10% of families by an average of around £2,000 per year (an increase of around 36%) and lift three-quarters of a million people out of poverty.

The proposals would not in and of themselves guarantee a living income for all. We have modelled the Weekly National Allowance at a rate that would render it cost-neutral compared to the personal allowance of income tax, and auto-enrolment for universal credit at current rates but with a greater level of uptake. One or both of these payments would need to be substantially increased to guarantee everyone a living income.

The proposals, however, would mean that more people have support to rely on when they need it, and would lay the foundations of a social security system capable of guaranteeing a living income for all. By demonstrating the potential of an alternative approach, we believe the proposals would help to build public investment in and support for the social security system. In turn, this could precipitate greater political will to increase payments to a level that ensures everyone has a sufficient income to thrive.