Private rent increases are making the wrong sort of headlines, with hikes of up to 20% in places. But in comparison, the coming pressure on social rents has flown somewhat under the radar. Come next April, social landlords will be able to increase rents by up to CPI from September 2022, plus 1%. That would make possible rises in social rents of up to 11% — the largest hike by far in years — squeezing some of the poorest families just as they are emerging from a winter of extortionate energy prices.

Thankfully, after months of pressure from activists in the summer, the government announced that there will be a consultation to explore capping rents at a potential rise of 3%, 5% or 7%. The question now is: whether, or by how much, rents should rise?

The cost of living is not the only consideration. Rent is the primary source of income, past government development programme grants, for the social housing sector. There are primarily two types of rental tenure in the social housing sector: social rents tied to local incomes or affordable rents up to 80% of market rents. Rents are paid for through two avenues: state support in the form of housing benefit which, where rents rise faster than wages as they are currently, will increase; and private disposable income. Therefore, any rise in social housing rents is a cost for both affected renters and the taxpayer.

New NEF analysis shows what the total cost to households and the housing benefit bill would be for England this April under the different scenarios for a rental rise cap. The calculations assume the proportion of social rent covered by housing benefit remains broadly constant. How awards within the benefit system change is complex, but broadly state support will look to cover these enlarging costs in a climate where rises in inflation and rents outstrip wages.

For each rent cap, the cost to households is marginally above that to the taxpayer. Even at a 3% cap — the lowest level initially suggested in the government’s consultation — the total cost would be approximately £612m. £306m of this would not be covered by housing benefit and represents an extra financial pressure on those households living in social housing. At a 7% cap, the total cost rises to around £1.4bn and again, just over half (approximately £715m) would be footed by household income other than housing benefit, most likely wages that have not risen in line with inflation.

At a time of insurmountable pressure on household finances, from soaring energy costs and consumer prices (inflation could reach 15% by 2023), a rise in social housing rents would add significantly to the financial woes of 17% of households in England.

A rise in rents may be the pressure that pushes these households into making impossible choices between putting food on the table, heating their homes or keeping a roof over their heads. So, we’re asking the government to protect those most exposed to the cost-of-living crisis by following Scotland’s example and freezing social rents

Then, the next question is how should this loss in social landlord income be accounted for?

In times of crisis, households should not act as a ​‘middleman’ to the government funding the social housing sector through housing benefit. This approach exposes households not fortunate enough to receive state support to unaffordable housing costs. Instead, the government should provide the social housing sector and councils with a direct capital grant for their operation, circumventing households. Such a grant would stop social landlords and councils scaling back their operations with a social rent freeze in place. Decarbonisation, building safety work and development pipelines must continue. Without grants, challenging the long-term net loss of social housing would be even more difficult.

With a triad of crises hitting the social housing sector — safety, climate change and affordability — financial support has never been more needed. With these challenges, the grant must be supplied intelligently while ensuring operation does not turn unviable. Constructive and swift dialogue between social housing providers and central government is a necessity.

If this grant amounted to the income that providers expected with an 11% rise, it would only cost the government around £2bn. If the grant matched the rent increases of April 2022 it would only cost £107m. These figures pale greatly in comparison to the £187bn in cumulative energy support, and the £28.9bn spent yearly on housing-related benefits for both private renters and social renters.

Without state support to social landlords, households may see their service charges go up, offsetting the benefits of any rent cap. Service charges, unlike rents, are not covered by the rent standard and are instead governed by wider rental legislation stating they must be ​‘reasonable’. Social landlords unable to maintain economic stability in challenging and turbulent economic conditions could be forced to roll their costs into service charges. This would make any rent cap redundant, further tighten household finances and increase the cost of housing benefit.

An unknown in the government consultation is whether residents in shared ownership arrangements (with a partial-mortgage and rent payments on the remaining portion of their home’s equity) will see their rents capped. Ultimately this is unlikely because unlike properties fully rented and governed by the Regulator of Social Housing rent standard, shared ownership rental rates are governed by individual leases, with most rising at the RPI rate of inflation plus up to 2%. The result? Potential rises of over 14% in a wider financial context of rising mortgage costs. The consultation should not ignore these households and recognise their precarity in this crisis.

Finally, this consultation touches upon a wider existential issue in social housing: by how much rents ought to rise. Affordability of rent is best determined in relation to income and the associated purchasing power of households. Social rent is the only genuinely affordable tenure because it is set in relation to local income levels. The current system of tying rents to inflation, which does not directly correlate with real income growth, slowly erodes the affordability of social rent. For instance, the Resolution Foundation estimates that all real income pay growth since 2003 will be wiped out if inflation reaches 13%. Yet social rent would still rise despite the worsening of the purchasing power of households, making the tenure less affordable.

There must be a wider shift in the regulation of the social housing sector to ensure rents reflect income in how they are set and how they rise, and subsidy is provided to social landlords to reflect their role in public service provision. As part of our campaign for more social housing, Homes for Us, we encourage you to write your MP through our tool to defend tenants from unaffordable rent rises.

Campaigns Homes For Us 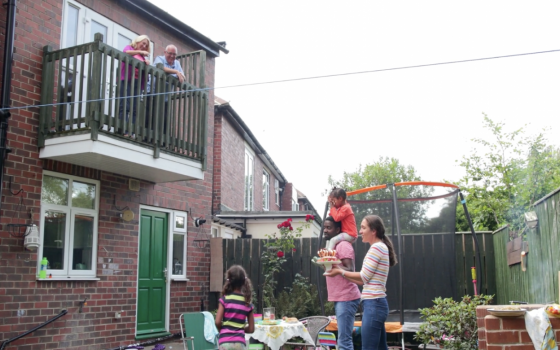 We need a new generation of social housing