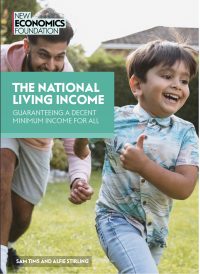 The crises of the early 2020s, of the Covid-19 pandemic and war in Europe, brutally exposed the fragility of the UK social security system. But this fragility was a long time in the making. A decade of cuts, freezes, caps, and haphazard migration between systems left the UK with one of the weakest safety nets, both among developed countries globally, as well as in the UK’s history. Millions of families were living in avoidable deprivation and hardship, leaving the country inexcusably vulnerable to an economic shock. The country was forced to essentially reinvent social security from scratch, not just once with the creation of furlough and income protection schemes, but again with the cost of living support and energy price guarantee and all at an eye-watering cost to government and society.

The UK now sits on the cusp of the greatest living standards crisis on modern record. The Office for Budget Responsibility (OBR) forecasts an eye-watering 7% fall in disposable income per capita over the next two years. But what this means for the day-to-day experience of families, and in particular families on low incomes, is even more harrowing. By December 2024, 43% of households will be unable to afford a decent standard of living, based on the Joseph Rowntree Foundation’s (JRF’s) ​‘minimum income standard’ (MIS), compared to 31% at the time of the last general election. This includes 88% of lone parents and 50% of working families with children. On average, those falling below the threshold for decent standard living will be short by £10,000 a year.

Historically, public support for income protection comes in waves, often mirroring people’s perceptions of the wider economic cycle. But the UK is now seeing the longest period of public support for the role of social security since at least the 1980s. The economic pain is genuine, and the trade-offs are real and cannot be wished away. But the design of social security can make a huge difference to how this pain is felt, by whom, and for how long. Rarely has the need for whole system change been higher, the opportunity been larger, or the costs of inaction been so great.

This report sets out NEF’s proposals for a new system of working-age income protection for the coming decade and beyond. It brings together and builds on our published work since 2020 by setting out the first step towards a new national living income (NLI) replacing the existing universal credit (UC) system. We set out and model a detailed reform agenda for the next parliament, built around four key principles:

Benchmark income protection to a minimum decent standard of living. To deliver against this principle the NLI would deliver a new minimum income guarantee benchmarked to need, including a new standard payment set at 50% of the MIS after housing and childcare costs (AHCC) by the end of the first parliament, worth £460 per month for a single adult and £770 per month for a working-age couple in 2021/​22, and beyond which rising to 75% of the MIS (AHCC); payments of up to 100% of the MIS (AHCC) for children, those with a disability, or those unable to look for work; and the abolition of caps, limits, and sanctions. This compares to a minimum of just 35% of the MIS (AHCC) for a single person over 25 on UC.

Expand universal provision to create a genuine minimum income guarantee. This would be delivered through two key features. First, a new national allowance paid to almost all individuals in the UK, not just those on means-tested benefits. This guaranteed element would be included in the calculation to bring households to a minimum level of the MIS (AHCC) and would repurpose part of the tax-free allowances of income tax and national insurance contributions. Second, a new system of auto-enrolment to help ensure that the social security system operates more like the inverse of the tax system: with additional support provided automatically when incomes fall, on a similar basis to how more tax is paid automatically when incomes rise.

The NLI would revolutionise tax and social security in the UK, with big gains for low- and middle-income households. Everyone outside the richest third would be better off overall, with the poorest families seeing their disposable incomes rise by more than 50% on average (£500 per month), and middle-income families seeing an increase of 9% (£200 per month). Even with the standard allowance set at 50% of the MIS (AHCC), the NLI would have a huge impact on the risk of deprivation. Among low-income households, the proportion falling below 75% of the MIS (AHCC) would drop from 53% to 19%, and the numbers at risk of deprivation would drop to all but zero, once the minimum income guarantee rose to 75% of the MIS.

A minimum income to ensure you can always afford life’s essentials.