Getting rents under control

How to make London rents affordable 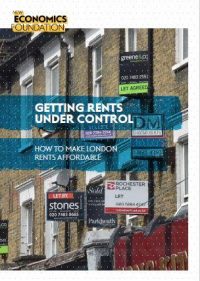 More and more Londoners are living in the private rented sector (PRS), which has seen huge growth in recent decades. The UK’s second largest tenure after home ownership since 2011/​12, by 2025 the Mayor of London’s office forecasts that private renting in the capital will be as prevalent as owner occupation. The sector, which is home to increasing numbers of families and older people, has also seen rents increase rapidly.

Since 2010, average private rents in London have risen more than three times as fast as average earnings, and in 2015/​16 around a quarter of privately renting households in the capital spent over half of their income on rent. Affordability is far worse in London than the rest of the country, with the average private rent for a one-bedroom home in the capital now more than the average for a three-bedroom home in every other English region.

A growing number of voices are calling for rent controls as part of the solution to London’s housing affordability crisis. 68% of Londoners are in favour, including the Mayor of London Sadiq Khan, who has publicly announced his intention to campaign for rent controls alongside his broader plans to design a better system for private renters. And a growing private renters’ movement, with the London Renters Union at its forefront, is demanding a fairer, more affordable PRS in London. This report outlines the building blocks for the powers and policies which would be needed to introduce a rent control for London.

While in many major cities in Europe and North America, from Berlin to New York, rent controls are the norm, the introduction of rent controls is often highly controversial, and the debate is polarised. This report analyses the benefits and risks of different types of rent controls, looking at specific examples of existing models from elsewhere, and drawing out lessons for London.

The scale of the housing affordability crisis in London means that, despite the risks, carefully designed rent controls are becoming increasingly necessary to create a capital with a fairer, more affordable PRS. NEF is keen to work with the Mayor of London and other stakeholders to take this work forward.