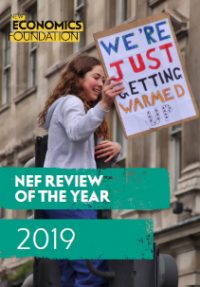 We are excited to present NEF’s Review of the Year – an overview of everything we got up to in 2019. In it you can read about our three missions to transform our failing economy: a new social settlement, a Green New Deal, and democratising the economy. In the meantime, here are some highlights we are particularly proud of:

We have worked to build common cause between the environment and trade union movements, helping to bridge the divide between climate activists and workers. Our Trust in Transition report set out how national and regional industrial plans can make sure workers are empowered to play an active role in the transition to net zero.

NEF launched Change the Rules, a new website that maps inspiring local, community and workplace initiatives to build a more democratic and sustainable economy, and showcases the policies to make it happen. We have so far mapped more than 60 initiatives across the UK, and are adding more each month.

Druids Heath estate in Birmingham faces demolition. NEF organisers have worked with the residents’ group opposing the council’s scheme, who say hundreds of units of social housing will be lost. The group want their own community-led regeneration which allows them to stay in the area and increases the number of social homes. The council has now agreed to pause the project, including evictions, and publicly committed to include residents in a new project management team.

4. No homes for nurses campaign

NEF revealed that homes being built on sold-off NHS land would be out of the reach of most of the staff on which the health service depends. Our organisers worked with residents and NHS staff in Southend to build Fossetts For The People, a campaign fighting to ensure that former NHS land is used to provide hundreds of new council homes.

In 2019 the Weekly Economics Podcast reached 1.25 million listens. We put out fantastic episodes on Lexit, the Green New Deal, the future of conservatism, rent controls, knife crime, election analysis and more. We also recorded some very special live episodes on the threat of algorithms, and how immigrants become treated as economic scapegoats.

6. Pay everyone a weekly national allowance

Our proposal for a Weekly National Allowance paying everyone £48 a week generated much media attention and was welcomed by Shadow Chancellor John McDonnell and Green MP Caroline Lucas. Funded by scrapping the tax-free allowance – the amount people earn before having to pay tax – 88% of all adults would see their post-tax income rise or stay the same, lifting 200,000 families out of poverty.

We identified steps government could take to move to a 30-hour standard week within a decade. We’re building the evidence base for how the different sectors would benefit, as well as supporting the independent 4 Day Week Campaign.

In South London, NEF has worked with local parents to bring an empty building on Deptford’s Vanguard Estate back to use as a community nursery. The Friendly Families Nursery will open this year. All staff will be paid at least the Real Living Wage. Parents have the option to volunteer with their children in the nursery, making childcare affordable and enriching the experience for everyone involved.

In September, all our monthly supporters received the first issue of the New Economics Zine. In it we showcased new ideas and platformed voices outside of orthodox economics. The next issue will be on mental health and the economy.

We have entered the last decade in which we can avert climate catastrophe, and a new year that ends with the momentous UN climate summit in Glasgow. This year we will support climate activists to build on the momentum they have generated over the past 12 months, empower communities, and work with mayors and local authorities to sustainably transform their economies, and much, much more.