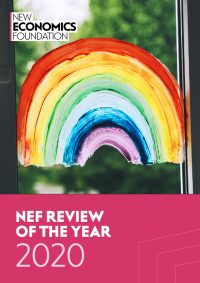 We are excited to present NEF’s Review of the Year – an overview of everything we’ve been working on during this challenging year. In it you can read about the three ways we’ve responded to the crisis: emergency response, supporting communities and Build Back Better. Here are some highlights we are particularly proud of:

In November, we launched the Winter plan for jobs, incomes and communities as part of the Build Back Better coalition. Proposals included improvements to the Job Support Scheme, the Minimum Income Guarantee and an 18-month government investment plan to create 1.1m low-carbon jobs.

We led action to ensure longer-term climate goals were not forgotten by central banks amidst the urgency of the coronavirus crisis. We showed that the Bank of England’s Covid measures were propping up dirty industries and our Decarbonising is easy report caught the attention of European Central Bank head Christine Lagarde.

Since March, we’ve organised 15 online briefings, covering a range of topics from childcare under lockdown, to organising during a pandemic and how we win a green recovery. We’ve featured speakers ranging from grassroots mutual aid organisers to the Shadow Chancellor, and engaged around 3,000 participants in the discussion.

Against a difficult backdrop, south-east London’s newest nursery opened its doors to children for the first time on the 24 September. For NEF, the Family Friendly Nursery in Deptford represents the culmination of years of research and work with the local community to establish a new model of childcare in the UK.

5. A new look and a new website for NEF

In March we relaunched the NEF website, featuring a more vibrant design in keeping with the look-and-feel developed for last year’s Change The Rules website. The launch marked the completion of a branding refresh that brought in cleaner, sharper lines, a livelier colour palette and a revamped NEF logo.

The award-winning Weekly Economics Podcast returned for its sixth year and surpassed over 1.8 million listens. A highlight was an extended conversation in June with writer, journalist and professor of sociology Gary Younge on the global wave of Black Lives Matter protests following the death of George Floyd.

We joined a core group at the heart of the Build Back Better movement: a collection of civic and religious leaders, business groups and trade unions pushing for a recovery to a fair and sustainable economy. Signatories include the Confederation of British Industry, the TUC and the Archbishop of Canterbury.

8. A trio of book launches

Three books were launched this year by Polity and NEF: The Case for Universal Basic Services, by Anna Coote and Andrew Percy, Unions Renewed: Building Power in an Age of Finance, by Alice Martin and Annie Quick, and The Case for a Four Day Week, by Anna Coote, Aidan Harper and Alfie Stirling.

9. Standing up for a living income

Our proposal for a Minimum Income Guarantee would provide a living income of £227 a week – the minimum needed for an acceptable standard of living. We campaigned alongside the likes of the Trades Union Congress (TUC), the Trussell Trust and Citizens Advice to fix the UK’s broken social safety net.

Launched on World Mental Health Day, the second issue of the New Economics Zine dug into the emotive topic of the economy’s effects on our mental health. Produced for NEF’s supporter network, it featured thought-provoking contributions from economists, doctors, environmentalists and others.

11. A future for small-scale fishing fleets

Since 2014, we have been supporting a community of small-scale fishers in their hard-fought efforts to safeguard their livelihoods by building their own quay in Eastbourne harbour. This year, construction on the quay finally began.

12. The Treasury is listening

In October, our economists showed that the Job Support Scheme would still put millions at risk of redundancy this winter. When the chancellor subsequently u‑turned on the level of wage subsidy for firms, the Financial Times reported that ​“officials had read a carefully researched report by the New Economics Foundation”.