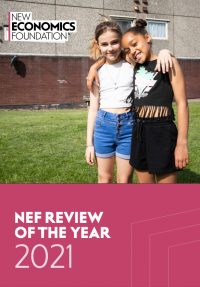 We are very excited to share NEF’s Review of the Year with you – an overview of everything we’ve been working on in 2021. Inside, you can read about the three missions which we’ve built our work around this year: the new social settlement, the Green New Deal and the democratic economy. Below, we’ve picked out 12 highlights that we are particularly proud of.

NEF is campaigning for a bold reimagining of income support for the 21st century: the Living Income. Since launching the campaign this summer at an event attended by 200 people, we’ve conducted a listening campaign which received almost 1,000 responses, and brought together 15 leading poverty organisations to back the campaign. Politicians are starting to take notice: the Scottish government is taking the first steps towards a Scottish Minimum Income Guarantee.

This autumn, we launched a major public campaign to get the government to commit to retrofitting the UK’s housing: the Great Homes Upgrade. We launched the campaign with a coalition of businesses, trade unions, green NGOs, and politically diverse mayors and local authorities. We won an early victory at the Labour Party conference when Keir Starmer adopted our headline policy, referencing our figures in his speech.

NEF has responded to calls for help from community groups fighting their local airport expansions. We provided expert economic challenge to previously undisputed assumptions in planning applications. Our economist Alex Chapman’s intense cross-examination at the Bristol Airport appeal formed part of probably the strongest challenge to the economics of airport expansion. Our Frequent Flyer Levy is increasingly cited as a route to reduce air travel.

We proposed cutting the universal credit taper rate to ensure low-income workers could earn more without seeing their welfare payments cut. In August, the Labour Party adopted this policy and attributed its position to NEF’s work. In his autumn budget, Chancellor Rishi Sunak followed suit, albeit with a watered down 55% rate, rather than the 50% suggested by NEF.

On the back of years of intensive work by NEF and our coalition partners, and breaking decades of orthodoxy, the Bank of England’s mandate was changed in the spring budget to include climate considerations. The Bank’s latest consultation on how to green its quantitative easing programme drew heavily from our work and referenced NEF directly. And the European Central Bank Governing Council announced a commitment to ​‘incorporating climate change considerations into its monetary policy framework’ as a result of a NEF-led campaign.

This year we published two New Economics Zine special issues. One focused on rebuilding our economy after the pandemic, and the other on the economy and the climate crisis, launched during the Cop26 climate summit. All issues of the zine are available online, but print editions are available as a thank-you to our valued supporters.

7. A future for the fishers of Eastbourne

For the past eight years, NEF has helped Eastbourne’s sustainable fishers with economic research, analysis and community development planning. Having survived the lockdowns when their market all but disappeared, the quay finally opened in August. With the smoker and shop now open, they are at last able to sell directly to the public – more than 30 years after they embarked on the project.

NEF is working with local authorities to tackle the climate and living standards crises together. The Croydon Climate Crisis Commission, chaired by our CEO Miatta and supported by NEF, delivered its final report in May. NEF also provided the secretariat to the Greater Manchester Inequalities Commission, where our CEO was a commissioner, which concluded in April. Our report received a glowing reception from Mayor Andy Burnham who adopted its recommendations in his mayoral election manifesto.

The award-winning Weekly Economics Podcast returned for its seventh year and surpassed two million listens. Some highlights were our episodes on culture wars, the police bill and fast fashion.

The success of our online New Economics Briefings for supporters introduced in the first lockdown convinced us to continue this format for events this year. NEF experts have appeared alongside political frontbenchers, mayors, academics, economists, journalists and activists to answer your questions on topics including the budget, Cop26, a just transition and the living income.

Just this month, and too late to make it into our annual review, we produced new analysis showing that half of UK families have seen their disposable income shrink in the last two years, while the richest are better off by £3,3000 a year. The research was covered widely in the media, while our videos and interactive map were popular on social media.

Photo of Druids Heath, Birmingham, where NEF is organising with social housing tenants, by Ella Carman.

The unequal impact of the energy bill crisis